The relationship between Finnish people and money is, diplomatically said, a story of its own.
In general, Finns don’t let their financial status show. We expect that everyone’s salary is a topic between the person and their boss.

Money issues are talked only with close friends and immediate family. Some funny things occur with this topic.

It is a national sport to do the domestic lotto in Finland. The game for a new millionaire is on every Saturday. The lucky winner is the person or group which has chosen seven same numbers between 1-40 as the ”lotto machine” picks up.

It is close to gambling madness when the first price is near 15 million euros! Dreaming of the jackpot is something that every Finn can relate to.

“What would you do if you won in the lotto?” is a popular question on a first date, as it is a safe and positive way to find out the values and interests of the other person.

I would say that 90% of Finns start their answer by saying that they would pay off their home or student loan.

Being an entrepreneur is a funny thing in Finland. At the moment, the taxation system of Finland supports more a regular employee’s life than that of a self-employed.

The other thing is how entrepreneurship is reviewed in the society.

I believe there is even a study that found out that it is more appreciated to be a lotto millionaire than an entrepreneur in Finland.

There’s a big change going on, as the world is evolving into a place where even more and more poeple work as a micro entrepreneurs. It’s super interesting to see how entrepreneurship develops in Finland in the next few years.

Among ourselves, we Finnish women are cautious and precise that nobody owes anybody money.

I honestly cannot explain this hilarious, time-consuming and calculator-needing feature of ours. It just feels awful to think that someone would think that I haven’t paid my debts!

On the other hand, we don’t feel the need of rounding up. Thus, I certainly have found myself several times paying to another girl’s bank account the exact 26,70 euros for a joint baby shower or bachelorette gift.

Nobody keeps track of anything moneywise in a group of Finnish men friends!

The key is to make everything as easy and fast as possible. They take turns in paying, based on a hunch.

(Or so it looks to me. I have made a couple of scientific interviews asking this and the men in question have also told that there is no definitive system applied.).

And I have to say, somehow this method really works! Everyone is always a standard 200 euros poorer after a boys’ night. 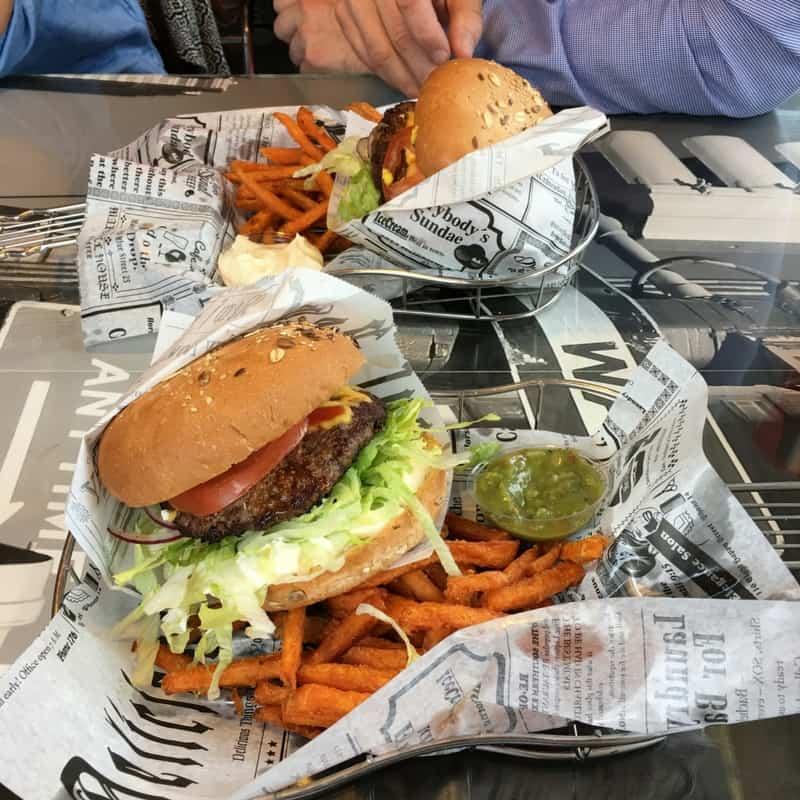 There’s no mandatory tipping culture in Finland, it doesn’t belong in our culture. Of course, anyone is free to tip if they would like to tip.

Another thing worth mentioning is that we Finns are spoilt and used to having our restaurant bills however we want. We can ask the bill all separate, all together or even in difficult arrangements.

This is why many waiters in Finland, start the service by asking, how everybody want their bills.

About Varpu
I’m the founder of Her Finland. I love mornings, Moomins, libraries and cinnamon buns. My oldest passion: spotting funny things. My newest interest: bird songs. Read more about me..

The European opposition to tipping must be related to their acceptance of socialist economic systems. The people receiving service are in the best position to decide what it was worth, If someone does a good job they make more money than someone who doesn't try as hard instead of just paying everyone the same amount no matter what they do.

Sounds like an American talking. Many conservative Americans are mystified by the European approach to life. On any measure of the quality of life the European countries rate quite high while the US rates quite low. Pride in doing a good job and being paid a fair living wage obviate the need for tipping. Greater equality has clear advantages over dog eat dog capitalism.

Hei Chris, thank you so much for your comment. I do understand what you mean. I cannot comment on Europe level, but I'm happy to talk more about Finland. I feel that it's two different approaches. In Finland, it's the Nordic welfare model. Many people appreciate the easiness of pricing. There's only one price you'll see and that you should pay. This price ensures that all people who have been involved in making this product or service, get a certain salary each month and the tax money is used to so many wonderful things, like free education, free school lunch, etc. On top of a price, anyone can tip if they would like to do so.

KIITOKSET for saying this about women friends and money! My partner is a Finnish guy and we have been living in Finland since February of this year. He and his friends will literally draw one person's card to pick up the tab at each establishment. This is insanity to me, some guys' weekend trips will cost him over 2000 EUR and some will cost him not 200 EUR, just the cost of lodgings. It is just a game for them and one I find completely mad, so I am glad it is not just me as a foreigner finding this completely crazy, and that Finnish women are more restrained and sensible about splitting tabs.

Being obsessive about this is the easiest way, and I think it is far less stressful than drawing cards like lots. I don't have many women friends here yet but I am glad to be prepared, and now I will be less cautious to make more friends and do things with them too.

Hei Em! Hahaha :D Yes, we Finns have very funny habits with money. I'm so happy that this post helped you! It really is so that Finnish men and women have completely opposite ways to deal with money when it comes to friends and going out. XD

This was so interesting to me. I also do not discuss money matters and I like for bills and such to be settled in a fast straightforward manner.

Hei John! Thank you so much for letting me know that you liked this post!! I'm so happy to hear that!

I enjoy reading all of your lists and I experienced many of these when I was in Finland in September. One I would add to this list is that the price that is on the price tag is what one pays. Here in the U.S. there is a price on the itme but when we check out sales tax is added. There is a state sales tax but then cities and counties can also add a sales tax. In my hometown the total sales tas is about 8.45%. I like the Finnish way better.

Hi Steve! That's so true! I like the Finnish way too because I love to know what an item costs without adding taxes on it! I suppose when you are used to the US system, it is not that bad, though. Thank you for a fantastic addition to the post!

Get to know me

All My Finnish recipes