I know, Finnish has a reputation as a difficult language to learn.

For example, the US State Department’s Foreign Service Institute lists Finnish among the group of languages considered the most difficult for English speakers.

I get a lot of questions about how long it takes to learn Finnish. I always say it depends. If you focus on learning spoken Finnish, it’s faster to master than standard Finnish because spoken Finnish is shorter and more relaxed (more about how to learn it later in this article).

When it comes to standard Finnish, it might be helpful to know the FSI estimates learning fluent Finnish takes around 1100 hours.

Wow! That’s far less than the recommended 10 000 hours of deliberate practice to become a master in any field. So, you just have to start somewhere!

My goal is to help you look at the Finnish language as lovingly as I look at my delicious blueberry pie.

To jump straight into course learning, check out my Conversational Finnish for Beginners Course. If you want a smaller step in the right direction, you can also boost your confidence with my FREE Spark Your Finnish class. 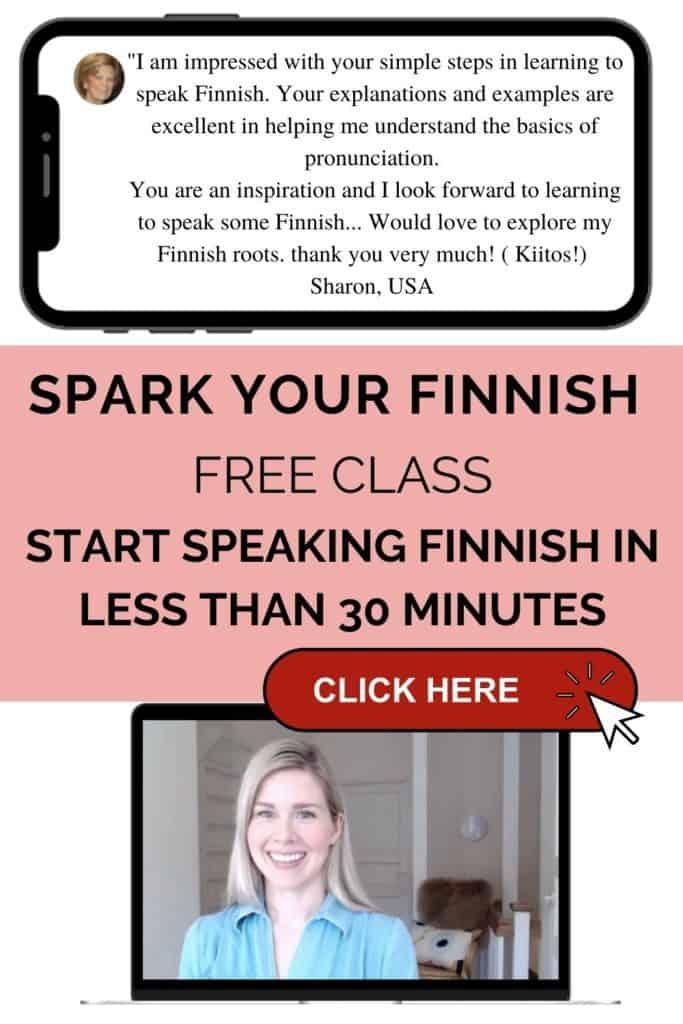 This is a long post so grab your favorite beverage and let’s dive in.

Disclosure: This blog post offers simplified versions of the basic concepts in the Finnish grammar. I’m a MSc in Technology by profession and wildly obsessed about showing you that you can learn Finnish.

While Finnish isn’t related to the Latin or Germanic language groups, it has many things going for it.

The Finnish alphabet contains only a couple of new letters and words are pronounced as they are written. Also, Finnish has no articles. That’s why Finns always forget articles in other languages.

It’s the grammar where things can get a bit complicated, but most things are very streamlined. For example, Finnish has no future tense, Finns use the present tense.

Fortunately, even grammar follows a set of rules.

This article will walk you through the basics of Finnish grammar and answers some of the questions that often come up at the beginning of this journey. 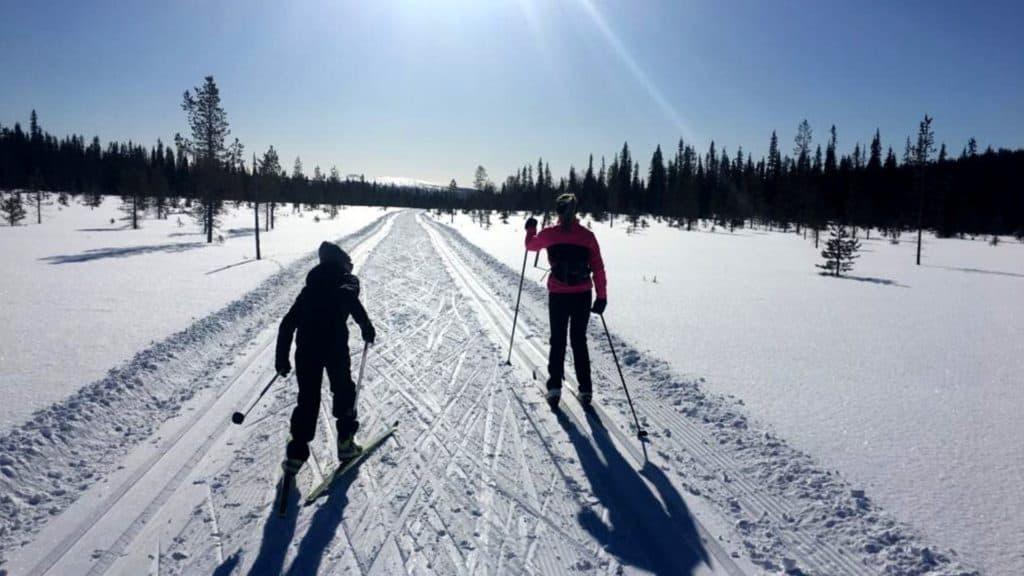 Why Finnish feels like your first attempt to cross-country ski? That’s because Finnish belongs to the Finno-Ugric family of languages. The good news is that Finnish follows rules, just like skiing tracks.

Introduction to the Basics of Finnish Grammar

The first thing you’ll notice when you start learning Finnish is suffixes added to the end of words. This seems complex at first but, once you learn the rules, things become more manageable.

Finnish doesn’t use many little words or prepositions to link nouns, pronouns, or phrases within sentences.

Instead, Finnish has cases, which correspond to different suffixes added to the end of a word.

Here’s an infograhic that helps understand the big picture. 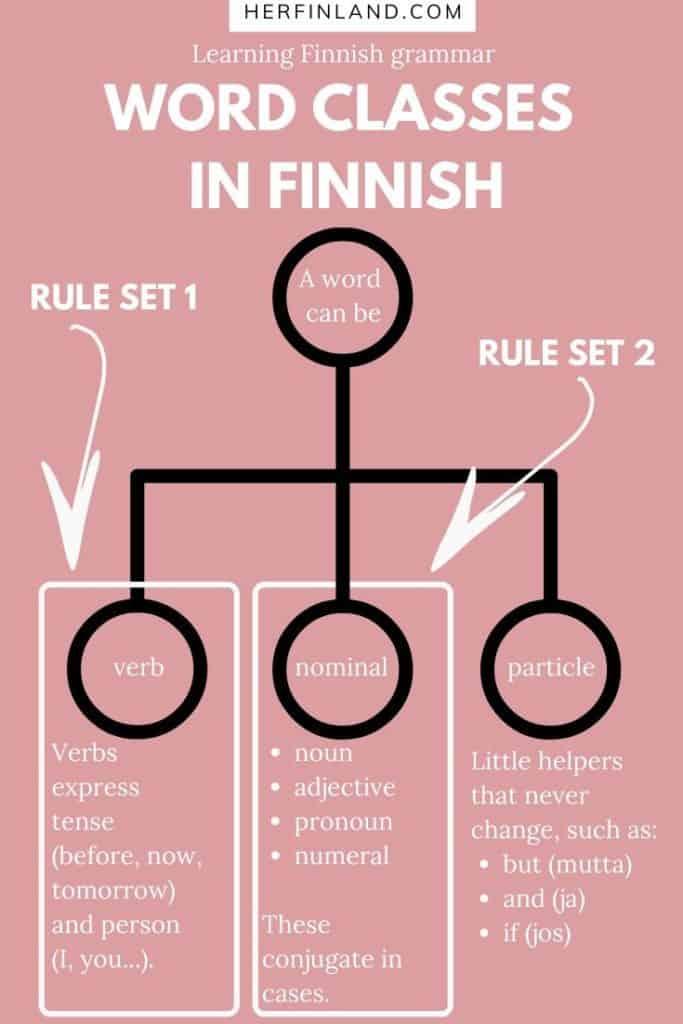 Next, let’s look at how to form words with the appropriate suffixes in Finnish in a little more detail.

Introduction to Verbs in Finnish

Conjugation means changing a verb to express tense (before, now, tomorrow) and person (you, she, we, etc.).

In Finnish, verbs are conjugated according to rules that cover six types of stems. Don’t lose your hope yet, I know this may sound scary but hear me out.

It simply means that if the infinitive (the basic form of the word) ends in, for example, a combination of vowels, the changes for conjugating the verb follow one set of rules.

Once you recognize the type of verb you’re dealing with, the changes within the word follow a set of rules.

Instead of many prepositions like at, from, in, with and as, Finnish has noun cases which are formed by adding a suffix at the end of the word.

All nominals use the same logic when it comes to cases. Let’s focus now on nouns because they are the most important when building your language skills in Finnish.

For example, “in the house” translates to talossa, where talo is the basic form of the word “house”, and the suffix -ssa is used in place of “in”.

The word itself may change to make it easier to pronounce. It requires changing vowels (or what is called consonant gradation).

For example, when you want to form the word “flower’s”, the word for “flower” kukka becomes “kukan” in the possessive instead of “kukkan”.

When you want to form the word “feet”, the word for “foot” jalka becomes “jalat” instead of jalkat.

My students tell me that learning the cases and stems is hard. I agree that there are a lot of rules and a lot ot learn. On the other hand, there are hardly any exceptions.

And you know what? When Finnish kids are learning Finnish, they don’t know the endings and stems of the words either. Yet they are confidently talking Finnish and being understood.

My daughter is now two and she is saying “jalkat” all the time. The correct plural form is jalat as we just learnt.

Little by little she gets some of endings and stems correct and continues to learn. You cannot learn a language if you’re afraid of making mistakes. 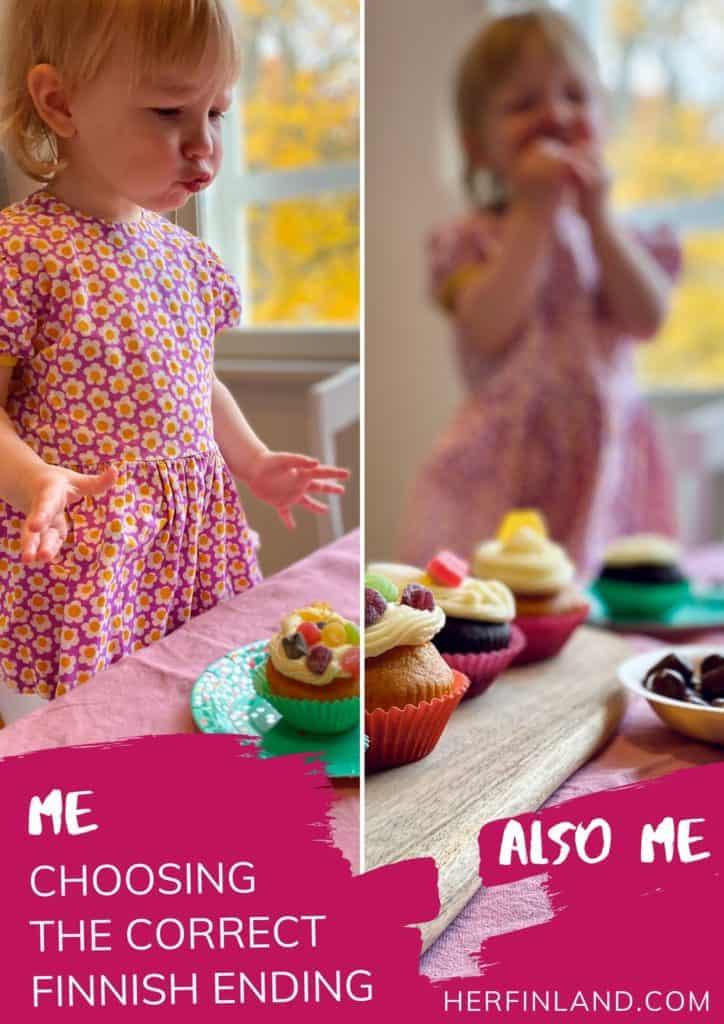 How many cases are there in Finnish?

There are 15 grammatical cases that can be added to the end of a nominal (nouns, adjectives, pronouns and numerals) to change its meaning. These tend to be the most challenging part of the language for foreigners to grasp. Don’t panic. Now it’s time to use your sisu.

The suffixes play the same role as prepositions do in the English language. All nominals follow the same set of rules.

Do Finns remember the grammatical weird names of all the nominal cases?

I’d say most Finns remember only some of them. We do learn them at school though.

How many types of verbs there are in Finnish?

There are six verb types in Finnish. As mentioned above, Finnish verbs can be divided into six types based on how the infinitive form of the word (for example, “to speak”) ends.

Type I verbs cover many words ending in two vowels and are divided into subclasses. Type II verbs also have two subclasses.

How many tenses are there in Finnish?

See, there aren’t too many Finnish tenses to learn! 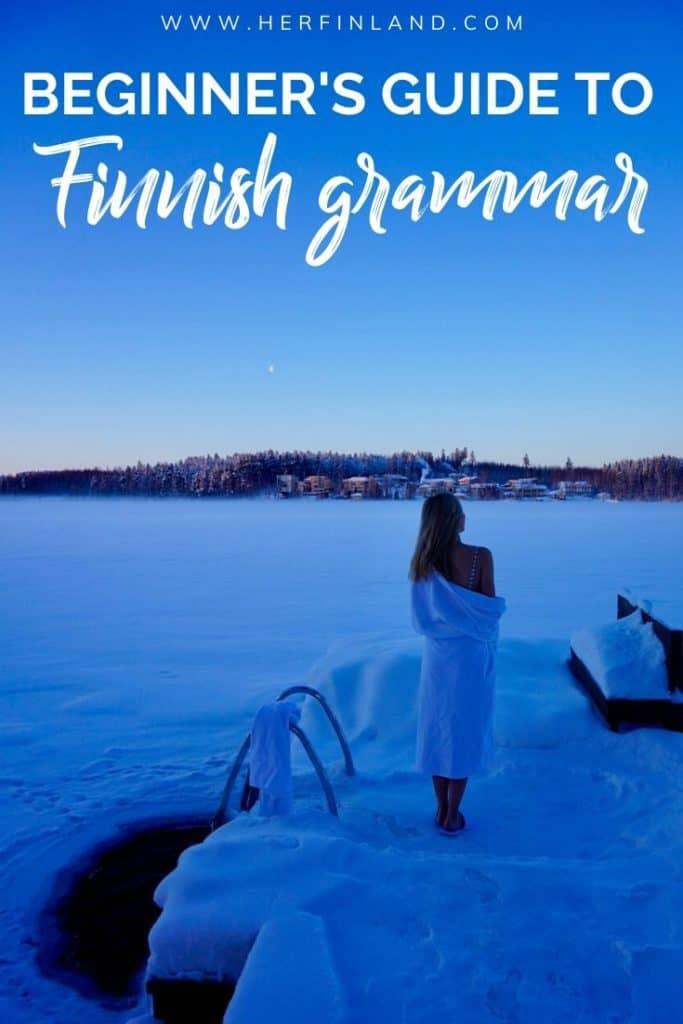 What is partitive in Finnish?

The partitive case can be a bit of a mystery. It is used in Finnish in several different situations and is indicated by the endings -a, -ä, -ta, -tä.

The partitive can refer to, for example:

Does the Finnish language have a future tense?

Finnish doesn’t have a future tense. Instead, Finns use the present tense, and the context is what sets apart something happening now (syön keittoa, I eat soup) and some time from now (syön keittoa huomenna, I will eat soup tomorrow).

It’s possible to highlight that you plan to do something in the future by using the word aikoa: aion syödä keittoa huomenna (“It is my intention to eat soup tomorrow”). In spoken Finnish, Finns use the verb mennä: meen uimaan huomenna (I’ll go swimming tomorrow”). 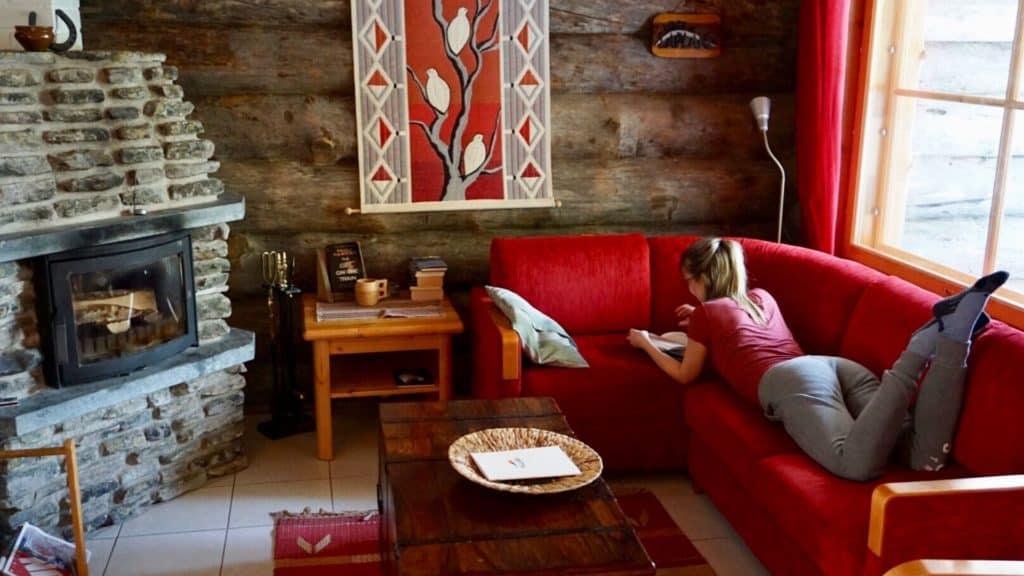 Does Finnish have gender?

All Finnish pronouns are gender-neutral, and grammar lacks gender.  In practice, this means Finns don’t use different pronouns to indicate gender (he or she), and the word hän can refer to both males and females.

Some words have masculinity or femininity in them, for example, mother tongue(äidinkieli), fatherland (isänmaa) and, similar to English, some occupations too, such as fireman (palomies).

How long it takes to learn Finnish?

When it comes to standard Finnish, it might be helpful to know the FSI estimates learning fluent Finnish takes around 1100 hours. 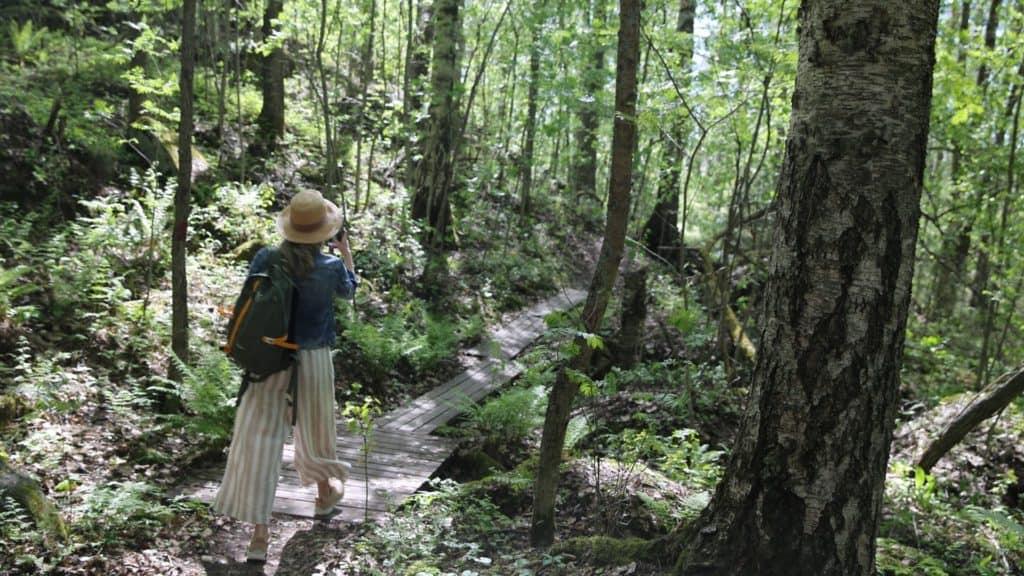 If Finnish makes you feel like you’re wondering alone in a forest, I’m pretty sure you’re a hidden Finn. Finns love to be in nature.

If a non-Finn speaks broken Finnish, how does it sound?

In my opinion, it sounds cute. You shouldn’t worry about that at all! As I said earlier, when Finnish toddlers are learning Finnish, they don’t know the endings and stems of the words either. Yet they are confidently talking Finnish and being understood.

Finns are always honored when someone is learning Finnish. If you’re not making mistakes when learning Finnish, I would suspect that you’re blocking your progress because most likely you’re capable of using the language more but are limiting yourself within your comfort zone.

Finns always talk English to me. Is my Finnish that bad?

This is nothing personal, I promise. From a local viewpoint, Finnish people are trying to be polite and letting you know that they can speak English.

I’m sure that any Finn will do their best to help you as it’s an honor to help you on your Finnish language journey.

If you’re curious about learning to speak Finnish, but not so fascinated about learning a lot of grammar, here’s your chance to discover the Finnish language.

Enroll in my free Finnish class for you – Spark Your Finnish. 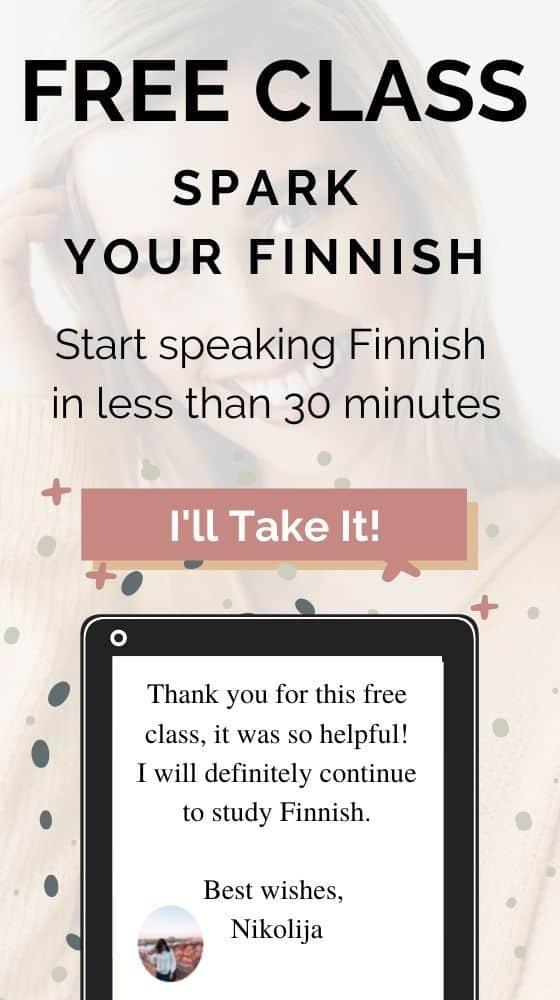 After taking this class, you’ll know how to say any Finnish word and see why Finnish isn’t impossible, thanks to my secret ingredient. Join our over 6 000+ community of students.

Wow, we made it! I’m so proud of you for reading this through. I hope this quick guide to Finnish grammar was helpful.

As I’m always updating my posts to serve you better, I’d love to know: what do you think about the Finnish grammar and learning the Finnish language? Drop me a comment and let me know.

Looking for more information about the Finnish language and culture? Check out these resources: 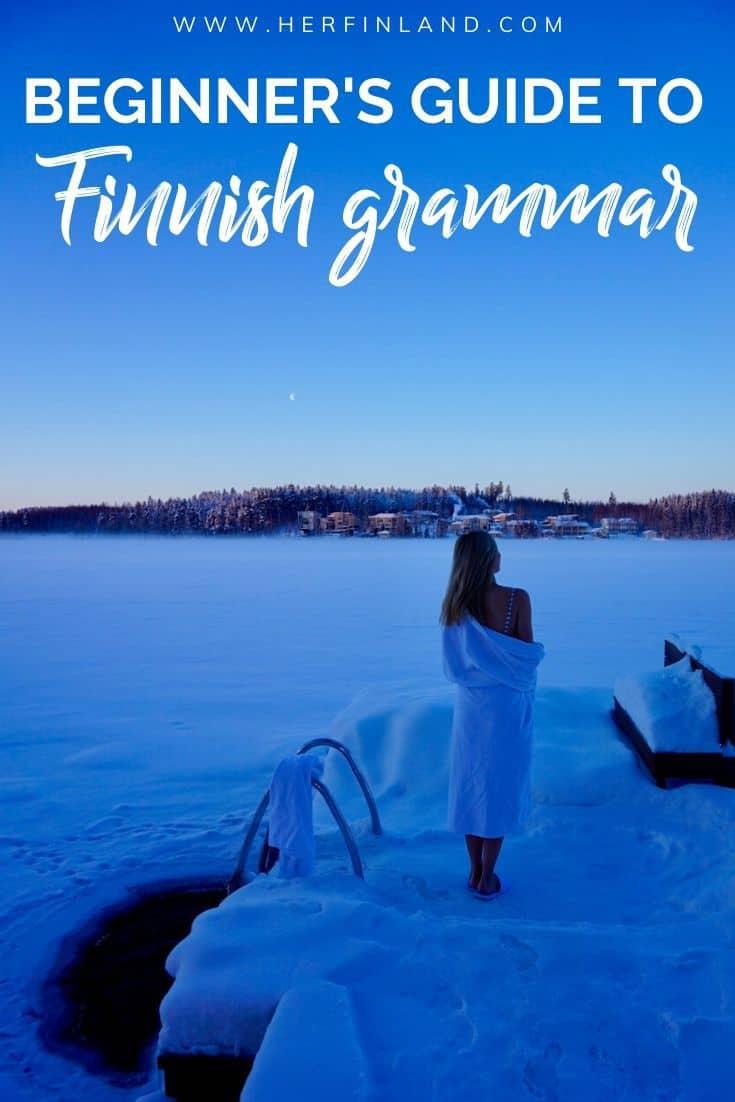